Andalusian Chickens have an ornamental layer. When you mate blue parents they have a hybrid characteristic that can yield black, splash, and blue chicks.

Comb, Wattles & Earlobes: The comb is single with five distinct points. It is medium-sized. Male: All five points stand upright. Female: The first point stands upright and the other four droop to the side. The wattles are moderately long, thin, smooth, bright red and medium sized. The earlobes are almond-shaped and bright white.

Color: They have a horn beak with dark slate shanks and toes. They have standard blue plumage. 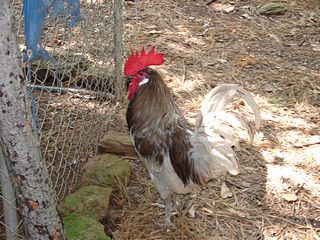 These birds originate from Andalusia, Spain and took this name on after being called the Blue Minorca for a time.

The breeders that began this old breed (some trace it back to ancient Rome) began by crossing black with whites.

This produced a bird that had a blue color and feathers that were laced with a darker blue color. When they then bred these birds together the hybrid trait began and their offspring would range from black, blue, and splash in color.

The blacks and splashes are not eligible to be shown, but they can be used for breeding stock. Keeping a good line of these birds going can be quite a challenge at times.

This reality is part of the reason that the breed is at the critical conservation level. It takes work to keep a good blue flock going.

Modern Andalusian Chickens are beautiful birds who have graceful movements and carries itself with their chest upright. The hens produce large chalky white eggs and rarely go broody.

The birds are large, rather active, and often very talkative. They are also rugged and healthy. This breed is not meant for confinement, but they excel in free range conditions.

The breed was first admitted into the APA in 1874.

Chicken Diapers - These are so cool! I use these for my Serama Rooster - "Scout".  Just click on the picture for more details.