The Barred Plymouth Rock is the most common variety of the Plymouth Rock breed. It is a beautiful barred color and a very good dual purpose bird.

Comb, Wattles & Earlobes: Medium-sized single comb with five evenly serrated points that are longer in the middle than the ends. Comb stands upright. Wattles are moderately long and well rounded. Earlobes are elongated ovals of medium size. All are bright red. 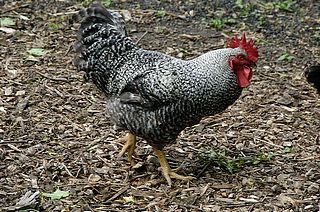 Black: Horn beak with shading of yellow at the point. Standard black plumage.

Blue: Horn beak with shading of yellow at the point. Standard blue plumage.

The Plymouth Rock is truly an American Breed. D.A. Upham of Worcester, Massachusetts got the breed started in the 1860's. He got started by crossing Black Java pullets with a common single combed barred cock. He kept the offspring that had barred feathers and clean yellow legs as his breeding stock to get started.

The breed became a hit because of their good traits such as egg production and hardiness. It didn't take long for the Barred Plymouth Rocks to continue to gain popularity as they became one of the most common breeds in America.

The Plymouth Rock, in the 1950's, was crossed with other breeds as commercial poultry production came into existence. This actually did more to hurt the breeds structure than help it. The White Rocks were predominately used for this, mainly for meat birds. Today though, backyard chicken owners have helped to get the breeds standard back to where it used to be.

The Plymouth Rock was first admitted to the APA in 1874.