The Buff Orpington is a very popular breed of chicken. Part of the reason that they are so popular is because they are an excellent dual purpose bird.

Buff Orpingtons: One of the most popular varieties. Beak is pinkish white; eyes are reddish bay; shanks and toes are pinkish white. Standard buff plumage. 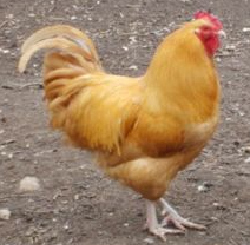 Black: Beak is black; eyes are dark brown; shanks and toes are black in young and shading to dark slate in adults, with pinkish white bottoms of feet. Standard black plumage.

Special Qualities: A good dual purpose bird with a nice disposition for backyard and barnyard flocks.

William Cook, from the village of Orpington in England was the originator of the Orpington breed. Cook was a prolific poultry man who studied and bred poultry in the late 1800's.

Cook developed the bird by breeding Black Minorcas with Black Plymouth Rocks and crossing the resulting chickens with clean-legged Langshans. The first Orpingtons were excellent meat birds with good bodies. They also were good at winter production of large brown eggs.

Cook originally introduced his birds in 1886 at a poultry show where they took first place. After this people began buying the birds from Cook, but they unfortunately began breeding for looks rather than production. By the turn of the century, many birds had become lethargic and infertile.

Cook and his children that followed, pressed on though with the development of the breed. They developed color varieties including: blue, buff, cuckoo, ermine, jubilee, partridge, red, and white.

Today only the black, blue, buff and white varieties are recognized by the APA. The Buff Orpington, which was bred from the Golden Spangled Hamburg, Buff Cochin, and Dark Dorking became the favorite for both show and production and is still the most popular Orpington today.

Their feathers are quite broad and full and give them a substantial appearance. These birds do well both free ranging and in confinement.

They are a docile breed that will even at times show affection to their caregivers. The Orpingtons are known to mature quickly and are very cold hardy. The hens are often good brooders and mothers.

The Buff Orpington was first admitted to the APA in 1902.