Chantecler chickens are very hardy and retains body heat thanks to its tight feathering and heavy down.

Comb, Wattles & Earlobes: They have a cushion shaped comb and the comb, wattles, and earlobes are all very small and bright red. 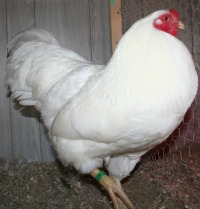 Color: There is also a buff colored bird that has been around for quite some time, but has never been recognized by the APA standards of perfection.

Partridge: They have a dark horn beak that may be yellow at the point and reddish bay eyes. They have yellow shanks and toes with standard partridge plumage.

White: They have a yellow beak with reddish bay eyes and yellow shanks and toes. They have standard white plumage.

In both cases the developers of the breed were seeking to develop a good general purpose bird that would lay through the long Canadian winters. They bred for small combs, wattles, and earlobes, as well as for plumage that would lie closely to the body, but has a high percentage of fluff. They did this to develop the cold hardiness required for the area.

This breed is quite gentle to human companions, but can be high strung and doesn't do well in confinement. They will still lay fairly well when confined though. The hens do tend to go broody.

They were first recognized by the APA in 1921.