Here is a continuation of the common chicken ailments section. This selection is the diseases that are O-Z.

Prevention: hatch only eggs that have no cracks, and are clean. Control incubator humidity, clean and disinfect incubator.

Transmission: contaminated soil or litter (can persist for up to seven months), etc.

Prevention: difficult, due to the bacteria's wide range of animal hosts.

Treatment: none effective, survivors may be carriers. This disease must be reported to the federal public health administration.

Transmission: does not spread from bird to bird

Prevention: keep chicks warm and do not hatch eggs from affected hens.

Treatment: carefully pick away the matter stuck to the vent. Cull chicks that don't recover.

Cause: pox virus that affects a wide variety of birds and survives for many months on scabs and feathers of infected birds.

Prevention: control mites and mosquitoes and vaccinate where pox is prevalent.

Treatment: none; isolate infected birds in uncrowded housing. Remove scabs around mouth and eyes where birds can eat.

Transmission: same as for dry pox

Prevention: same as for dry pox

Treatment: If thick discharge interferes with breathing, clear the bird's airway with Q-tip coated with iodine. Other than that, treat much like dry pox.

Cause: rotavirus common in poultry houses, but it doesn't always cause disease.

Transmission: contact with infected birds and their droppings and spreads on contaminated equipment.

Prevention: clean and disinfect housing periodically and do not start new chickens on used litter. 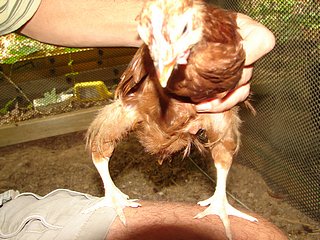 Symptoms: in young birds: swollen, flat hock joint, hopping on one leg, sometimes a leg twists and rotates to the side.

Cause: deficiency in manganese or one of five B vitamins.

Transmission: nutritional, does not spread from bird to bird.

Cause: bacteria; it can infect many birds but does not survive very long in the environment.

Transmission: contact with moist droppings, blood, tissue or mucus from infected birds. Also can be spread by biting insects or ticks.

Prevention: control ticks and other blood-sucking insects. Do not house clean birds where an outbreak has occurred.

Treatment: staph bacteria are resistant to many antibiotics, but treatment may be sufficient if a suitable antibiotic is determined by laboratory testing.

Symptoms: in apparently healthy broilers, usually males, they get extended neck, gasping or squawking, wing beating, leg pumping, flipping onto back, and then death within one minute of first symptoms. In hens: cloacal tissue goes through vent and quick death.

Cause: unknown; may be caused by high carbohydrate feeds and rapid weight gain.

Transmission: nutritional, does not go from bird to bird.

Prevention: low-intensity lighting and avoiding noise and other disruptions.

Cause: yeast like fungus commonly living in bowels of chickens that infect when normal flora are disrupted by coccidiosis or antibiotics, growth promoters, and other drugs.

Prevention: good nutrition and sanitation and avoiding long term treatment with antibiotics and other drugs.

System/organ affected: starts in intestinal tract and migrates to other internal organs.

Transmission: droppings of infected birds or picking at contaminated carcasses of dead birds, spread by shoes and equipment.

Prevention: design housing so birds can't pick in droppings, do not mix birds.

Symptoms: in young birds: sudden death with no symptoms, hunched up posture with head pulled in and eyes closed, diarrhea.

Cause: bacteria that affect game birds more often than chickens. It persists under various conditions and resists disinfectants.

Prevention: remove and replace litter between flocks or raise birds on wire. Avoid overcrowding and manage internal and external parasites.

Treatment: strepomycin in drinking water at rate of 15 grams per gallon for ten days. All survivors may be carriers.

From Chicken Ailments to Chicken Diseases