The Cubalaya is a game bird who is from the island of Cuba. They are beautiful birds and rather mild mannered as game birds go.

Class: Standard: All Other Standard Breeds Bantam: All Other Combs, Clean Legged

Color: The beak is white or light horn and the eyes are reddish bay. The shanks and toes are pinkish white, unless otherwise noted.

Black: The shanks and toes are slate and they have standard black plumage. 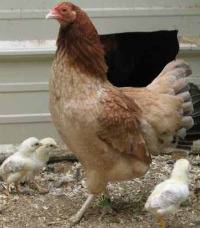 Black-Breasted Red: Male: Standard black-breasted red plumage. Female Cinnamon-shaded, wheaten type coloring with dark cinnamon-red on the head and neck and lighter cinnamon-wheaten on the body. They have a coloring on the tail. 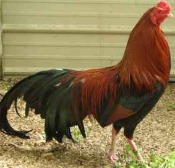 Red Pyle: This variety is not yet recognized by the APA. They have standard red pyle plumage.

Special Qualities: A beautiful bird that is mild mannered when compared to other game birds.

These birds were bred for the trifecta: egg production, game, and meat. They were originated in Cuba from Asiatic and European fighting stock. They are less likely to fight in a flock situation than other game birds and are really rather on the mild side. 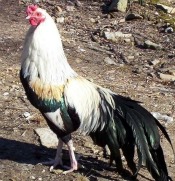 They are also really very striking birds. They have the upright posture of most of the fighting breeds, but they also look rather showy. Their long saddle feathers flow in a line from the base of the neck to the tip of the tail that creates a sweeping effect with the feathering and really looks kind of majestic.

In Cuba today, the white and black varieties are still used for commercial meat and egg production. The hens are good mothers and go broody easily.

They were first admitted into the APA in 1939.

Return from Cubalaya to Poultry Breeds