Dominique chickens are known as being the oldest U.S. breed and is still a good dual purpose bird. 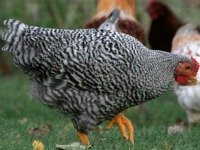 Comb, Wattles & Earlobes: These guys have a small to medium rose comb and small to medium wattles that are well rounded and smooth. The earlobes are medium-size and oblong and they are all bright red.

Color: They have a yellow beak and and reddish bay eyes with yellow shanks and toes. The feathers are barred in black and creamy white over their whole body. The males may be a little bit lighter than the females in coloring.

This breed was popularized in the mid-eighteenth century in America and remained the most popular breed for some time.

It was truly the first American breed and was present in barnyards far and wide. During the mid-nineteenth century the Barred Rock took over and many began to breed these instead of these barred birds. 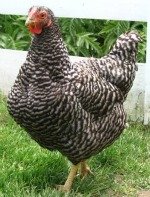 In the 1950's some thought that the breed may have even went extinct. Luckily for us (and for them), they did not. There were a few breeders who had held on to the breed and in the 1970's they got a second chance because of the efforts of these breeders and the ALBC.

They are very hardy birds that do well when allowed to free range, but can tolerate confinement. They are known to be extremely good foragers and good egg layers. The hens do seem to go broody.

Their coloring is also known to be good protection from hawks. The barred coloring tends to be less attractive to these predators from the air and seems to protect the birds. They are also calm and very easy to work with.

They were first recognized by the APA in 1874.