Dorking chickens are a good choice for backyard chicken owners. It is a good dual purpose bird with fine textured meat. 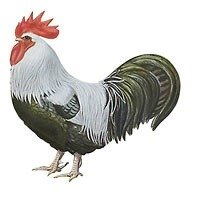 Comb, Wattles & Earlobes: They have large wattles and medium size earlobes. All, including the comb, are bright red.

Single Comb: Male: They have a large comb that has six evenly serrated points that stand upright. The middle two points are the longest. Female: They have a medium size comb with six distinct points falling to one side of the head.

Rose Comb: They are large, square in the front, covered with well-defined spikes and small rounded points.

Color: Some varieties, including black, crele, light gray, and speckled are available, but not yet recognized by the APA standard of perfection. The eyes are reddish bay and the shanks and toes are pinkish white for this breed.

Colored: This variety includes both single and rose comb. The beak is dark horn. Male: The hackle and saddle have straw-colored feathers with a black stripe. The front of the neck, cape, breast, body, and tail are lustrous black. The back and wings are black with straw lacing. Female: The hackle is black with straw lacing and shaft. The front of the neck and breast are salmon with some black edging on lower areas and the remainder of the feathers are brown to brownish black, mixed with gray.

Cuckoo: They have single and rose combs. The beak is pinkish white streaked with horn and they have standard cuckoo plumage.

Red: They have single and rose combs. Teh beak is pinkish white streaked with horn. Although this variety is referred to as red, it meets the specifications for black-breasted red plumage.

Silver Gray: They only have a single comb. The beak is pinkish white streaked with horn. Male: The head, neck, back, and saddle are white to silvery white and the cape, breast, body, and legs are black to greenish black. The tail is primarily greenish black, though small places near the saddle are laced in white. The wings are black with white highlights and the under color is slate. Female: The head is silvery white and the hackle is silvery white with a narrow black stripe and some gray stippling. The front of the neck and breast are salmon shading to gray at the sides. The back, body, legs, and wings are ashy gray with some white stippling. The tail is dull black stippling with gray.

White: They have single and rose combs. The beak is pinkish white and they have standard white plumage.

Britain is credited for Dorking Chickens, although the ancient writings of Columella, a Roman farmer and writer, suggests that the first stock of the breed possibly originated in Italy and was brought to England by the legions of Julius Caesar in approximately 54 BC.

The breed is a table bird and is known for its very white and fine textured white meat. Some of the earliest settlers in the U.S. in Jamestown, etc. probably brought them to the United States. By the mid 1800's they were very popular on American farms, particularly in New York State.

Dorking Chickens are known to be calm, docile, and adaptable to a variety of settings. The hens readily go broody and are excellent mothers. They lay a fair amount of large white eggs. The males combs can be susceptible to frostbite in extreme weather, but the hens tend to continue to lay throughout the winter and can be quite cold hardy.

The breed was first recognized by the APA in 1874.