Egg Facts You Should Know

Chicken eggs are an important part of all kinds of foods, and are probably in a lot of things you don't think of as being "eggy". That's because eggs have so many interesting properties.

They can act as a leavening agent to make baked goods fluffy, as a binder, as part of custard, be whipped in the form of egg whites into a meringue, and be used in all kinds of other ways. Let's take a look at a few egg facts that will help you understand more about chicken eggs.

Inside every egg, you will find an air cell. This is the empty space between the white and the shell. It's usually at the big end of the egg, and isn't present when the egg is laid. When the warm egg contracts, the inner membrane separates from the other one, forming this cell. 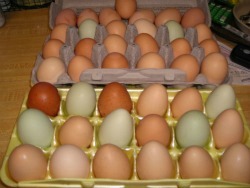 An egg candler uses the size of this cell to decide what grade the egg is. The smaller the air cell, the higher the grade, with grade AA eggs having an air cell no bigger than a dime. The air cell gets larger as the egg ages.

The egg white, or albumen, makes up about two thirds of an egg's weight, and contains more than half its protein, plus a number of other important minerals.

There are four alternating layers to the white an inner thick white, an inner thin white, and an outer thick and thin white. As the egg gets older, the egg white will tend to thin out. Older eggs spread out more, while fresh ones remain relatively solid.

Older eggs also have clearer whites. When you beat an egg white, it foams up and increases in volume, allowing you to make a puffy omelet, angel food cake, souffle or meringue. How about those egg facts.

The yolk is the yellow part of the egg, and makes up the remaining third of its weight. It has about half the protein in the egg and all the fat, it also has the majority of the nutrients including vitamins A, D and E. Egg yolks are one of the few types of food that naturally contains vitamin D. It also acts as the emulsifying agent in eggs.

Some people think the color of the yolk indicates the quality of the egg, but this isn't necessarily true. It does show what the hen has been eating.

Chickens eating barley or wheat lay eggs with light colored yolks, while hens eating yellow corn and alfalfa lay darker colored yolks. A diet of white corn will produce yolks with almost no color at all.

Sometimes a hen will produce a double yolked egg, or even one with no yolk at all. The embryo forms from the yolk in a fertilized egg. This is also the part of the egg that feeds the developing chick.

The yolk is anchored to the white with the chalaza, or ropey strands of white. These are not problems in the egg or embryonic chickens. Instead, they keep the yolk in place. The more prominent they are, the fresher your egg will be.

You may also find a blood or meat spot in the egg. They're sometimes found on egg yolks, and don't actually indicate a fertilized egg. These spots are caused by a rupturing blood vessel when the egg is formed, and show up in less than one percent of all eggs.

When the eggs are candled, they are mostly removed, but not all are caught. They're safe to eat, and the stop can be removed with the point of the knife if you prefer. If you see a blood spot, however, you can be assured that the egg is fresh. These spots disappear over time.

The egg shell protects everything inside, and can come in a number of different colors. The color of the shell comes from pigments in its outer layer, and varies according to the breed. You can tell what color egg a hen will lay by the color of her ears and feathers.

There is no difference between the eggs, if the chickens were treated the same way. However, chickens which lay brown eggs are usually larger and need more food. This makes brown eggs costlier than white ones. Some chicken breeds lay unusually colored eggs, such as green or teal.