The Faverolle is an excellent dual purpose backyard bird. These birds are commonly docile and good with children, although you can have the occasionally aggressive rooster.

Color: In addition to those listed below, the British have developed a cuckoo variety and an ermine variety that soon may be in North American.

Black: Beak is black; eyes are dark brown; shanks and roes are black. Standard black plumage including beard and muff. 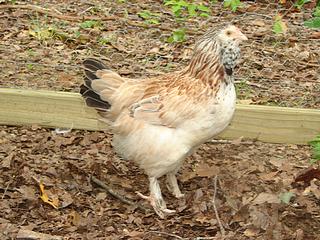 Salmon: Beak is pinkish horn; eyes are reddish bay; shanks and toes are pinkish white. Male: Head and hackle are straw. Beards, muffs, front of neck, breast, body, tail, and legs are black. Back is reddish brown laced with light brown changing to straw at the saddle. Wings are black highlighted with straw and white. Female: Beard and muffs are creamy white. Head, hackle, back, wings, and tail are salmon-brown. Breast, body, and legs are creamy white.

The Faverolle was developed in France in the mid 19th century. It is known to be a strong meat bird as well as a good layer of brown eggs in winter. Considering that no records were kept of the breeds development, it is unknown as to what breeds they originated from. Some experts feel strongly that there were some Dorking, Houdan, Brahma, and Langshan in the mix, as well as Cochin.

These birds have five toes, lightly feathered legs, a beard and muff and a broad breast that is carried forward. They make good backyard birds and are known to have a pleasant temperament. They often even become affectionate with their handlers.

The Faverolle was first admitted to the APA in 1914.

Return from Faverolle to Poultry Breeds