I have seen the antics of funny chickens over the years and have seen a few funny looking chickens.

The Polish breed of chicken comes to mind, with the large spray of feathers on their heads that can flow over their eyes leaving them nearly blind. Some people give them a little “hair cut” to make their lives easier.  Just the sight of this breed makes me smile.

These fluffy creatures with their purple combs and extra toes make them very funny chickens, the least like all other chickens. But when it comes to the Silkie, don’t under estimate their fluff factor or size! These little roosters have a crow that can rival sounds the biggest roosters make.

This little blue Silky came to me with a mixed flock of some bantams and large hens. He was my 3rd rooster in the flock and I was concerned for his safety with so many large chickens and two large roosters. 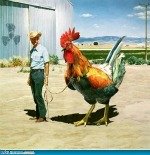 With a huge chicken yard, this Silkie Bantam rooster chased my large Marans rooster all day, keeping him from the hens and trying to prevent him from coming to roost at night. I decided to sell my mixed Banty flock of funny chickens as this little Silkie Roo was making life miserable for my Copper Marans rooster.

Probably the funniest situation I’ve witnessed down at the chicken yard was between two roosters. One was a giant Black Langshan that stood nearly 3’ to the top of his comb. His rival was an Olde English Game Bantam named “Henry”, after King Henry the 8th of England.

Henry considered every hen his, even though he was barely a foot tall. Little did Henry know, but my large hens were in no danger of being bred by him. He would satisfy his breeding instincts by holding onto one wing feather as he stood on the ground next to them, stomping his little feet.

Then he’d let out a victory crow over what the thought he had just accomplished. That alone was something very funny chickens have done in my presence. There’s more…I’ve made it a habit to keep roosters separate, but little Henry could fly and get over fences easily.

One day Henry decided to defend the farm and his honor against our tall Langshan rooster. Henry postured, crowed, and put on quite a show as he approached his target and got ready to teach the Langshan a lesson.

Henry mustered up his courage and ran into battle…the Langshan just stood there looking down on little Henry for a half minute or so. There almost seemed to be some recognition of Henry’s bravery by this giant black chicken, and then he gently stepped over Henry and went on with his big chicken day.

Henry stood there looking a bit puzzled, after passing through the feathered archway of the Langshan’s legs, as if to say: Did I win? I think I won! Cock-a-doodle-do!

More Funny Chickens: I have trouble looking at them because, well, just because, and that’s the Naked Neck or Turkin. Some people just love them. Another is the Frizzle Cochin. Cochins, large and small, are a wonderful breed. The Frizzles are lovely to look at and come in many colors.

If you plan to breed them, you shouldn’t breed Frizzle to Frizzle. If you have a Frizzle rooster, the hens should be normal feathered Cochins or normal feathered roo with Frizzle hens. You’ll get some Frizzle and some normal feathered chicks. There is a huge advantage to the Frizzled Cochin rooster though.

For some reason, due to their genetic codes, most Frizzle Cochin roosters are unable to crow. This makes them a good option for those in the city that want to have chickens, or for those that don’t want a rooster waking anyone before the crack of dawn.

Return From Funny Chickens To All About Chickens