Color: The beak is horn and the eyes are dark brown. The shanks and toes are slate. In spite of the name, the bird does not hold to true blue coloring. The head is silvery white and the neck and upper breasts have white feathers with a slender black stripe down the middle transitioning to black feathers with white lacing. The lower breast, body, legs, wings and tail are bluish black to gray with penciling. Male: The back and saddle are similar to neck. Female: The back is bluish to gray with penciling.

Special Qualities: They are a good layer of lightly tinted brown eggs. 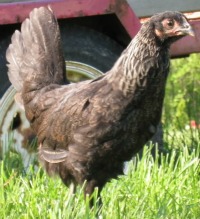 These birds were developed around Decorah, Iowa in the first half of the 1900's. This bird is very rare and hasn't been recognized by the APA or ABA.

The almost folk like story of these birds is that a White Leghorn hen went broody and hid under a building to brood her chicks. When she finally came out she had a group of chicks that were unlike any chicks in the area.

Some were colored chestnut, but others looked like pheasant chicks, with light yellow, horizontal stripes on their cheeks, and a triangle of yellow under their chins, with black stripes down their backs. Some of the old timers that are familiar with the breed would tell you that the breed was sired by a pheasant.

In the 1960's some hatcheries within Iowa carried the breed readily. As time passed, and these hatcheries went out of business the breed was almost lost.

Ken Whealy, of a Decorah based non-profit organization that was dedicated to the preservation of heirloom plants, discovered a few struggling flocks of these birds in the 1980's.

Since then he has been trying to distribute birds to any interested parties in an effort to restore the breed.

The breed is a dual purpose bird and is known as a good forager. Hens lay light brown eggs and as the story suggests, they do tend to go broody.