leghorn Chickens are a popular chicken breed that are early to mature and are excellent layers of large eggs.

Color: Additional varieties, such as cuckoo and mottled, are recognized outside the United States, but not by the APA or ABA at this time. Beak, shanks, and toes are yellow, unless otherwise noted, with red eyes.

Dominique: Rose Comb only. The feathers are barred in black and creamy white over the entire body. Males may be a shade lighter than females. Under color for both is slate.

Exchequer: Both single and rose comb varieties with white and black, fairly distributed across the body.

Special Qualities: Early to mature and an excellent layer of large eggs.

Leghorns Chickens are one of the few breeds that actually have the distinction of being imported into North America twice. They came straight from their native Italy as early as 1830 before they made it to Great Britain. They then came back to the U.S. via Britain in the 1870's. It is believed that the first imported birds died out sometime between the 1830's and the 1870's. 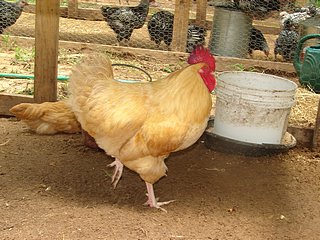 Leghorns have long been one of the most popular in the world due to their exceptional egg laying abilities, their adaptability to confinement or free range, and their hardiness. They have more varieties recognized by the APA and ABA than any other breed, which says a lot for their popularity.

These birds lay large white eggs and have one of the best feed to egg ratios of any pure breed.

Leghorn Chickens were first recognized by the APA in 1874.