Minorca Chickens are a rather ornamental bird, but is also a good layer of large eggs. They do well even in the hottest of temperatures.

Comb, Wattles & Earlobes: They have large wattles and large, almond shaped earlobes set close to the head. The combs and wattles are bright red and the earlobes are bright white.

Single Comb: Male: They have a large comb that has six evenly serrated points that stand upright. The middle points are the longest. Female: They also have a large comb with six distinct points and the first point loops over the beak, while the rest droop to the opposite side of the head. 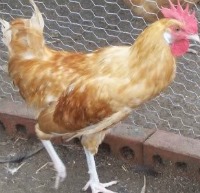 Rose Comb: Both genders have a moderately large comb, which is square and tapers evenly from front to back and is covered with small, rounded points.

Black: They have a black beak, dark brown eyes, and dark slate shanks and toes. They have standard black plumage. 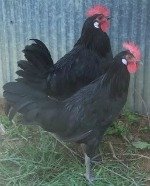 Buff: They have a pinkish white beak, shanks, and toes with reddish bay eyes. They have standard buff plumage.

Self Blue: They have a horn beak, brown eyes, and slaty blue shanks and toes. The plumage is an evenly colored light blue. The head, neck, wings, and tail are highly glossy on males. Just the head and neck are glossy on females.

White: They have a pinkish white beak, shanks, and toes with reddish bay eyes. They have standard white plumage.

Special Qualities: They do well in hot weather, but struggle in extreme cold and they are early to mature.

This breed is another old Mediterranean, dating back to the time of the ancient Romans. It was developed in Spain, though British breeders in the 1700's and 1800's had a big influence on the breed we know today.

Minorca Chickens are the largest of the Mediterranean breeds and gives off an impression of size and strength with their look. Part of this look is imparted by their muscular looking legs that sit squarely under their body, as well as their large wattles and earlobes and pointy tail.

This breed is early to mature and the hens are excellent layers of extra large white eggs. They seldom go broody. The breed is active and usually avoids human contact. They will tolerate confinement, but do best in free range situations. They will openly range and boldly go out into open areas. Raptor predators usually leave them alone because of their sheer size.

Their large comb, wattle, and earlobes do leave them susceptible to frostbite in extremely cold climates.

They were first recognized by the APA in 1888.