Phoenix Chickens are a small, highly ornamental bird with an extraordinarily long tail. 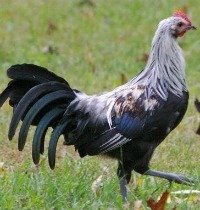 Color: The beak has shades of horn and teh eyes are reddish bay. The shanks and toes are light to dark blue.

It is a very old tradition in Japan to raise "garden" chickens with exceptionally long tails. These Japanese long tailed birds, called the Onagadori, is where this breed originated.

These original birds could have tail feathers that measured up to 30 feet! These birds were transported to Germany where the Germans found that the breed was susceptible to health problems.

The Germans solved this problem by crossing the Onagadori breed with game breeds and Leghorns to come up with this breed.

The Onagadori has an unusual set of genes that allow for such a long tail growth, including a recessive gene that keeps it from molting its feathers each year.

These genes were lost in the development of the Phoenix, so the tail feathers do shed and therefore never reach the extreme lengths that the Onagadori could.

The Phoenix's tail however, is still impressive and unique and can reach several feet in length. Some breeders may still refer to their birds as Onagadori, but unless the birds have feathers that reach over six feet in length, it is unlikely and they are probably incorrect.

These birds are generally docile, but unless you raise them by hand they are usually not the friendliest of birds and usually keep to themselves.

They must have good accommodations to enjoy their full beauty as their feathers need to stay dry and have room to grow. The hens do not lay many eggs, but can go broody and are good mothers.

Phoenix Chickens were first accepted to the APA in 1965.