The Rhode Island Reds are an excellent layer of large brown eggs and also a fine eating bird. They are also a hardy breed who can survive in cold and hot weather, they are often early to mature, and usually calm.

Comb, Wattles and Earlobes: Recognized in both single and rose combed varieties. Medium size wattles and earlobes. All are bright red. 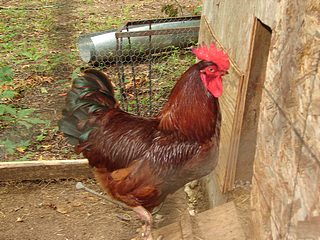 Single Comb: Medium to moderately large single comb, with five evenly serrated points that are longer in the middle than the ends. Comb stands upright.

Rose Comb: Moderately large in the male; smaller in the female.

Color: Reddish horn beak; reddish bay eyes; rich yellow shanks and toes tinged with reddish horn. A line of red pigment running down the sides of shanks and extending to tips of toes is desirable. Plumage is primarily rich, lustrous dark red. Tail is mainly black, though it may have some red near saddle or edges. Wings are mainly red with some black highlights. 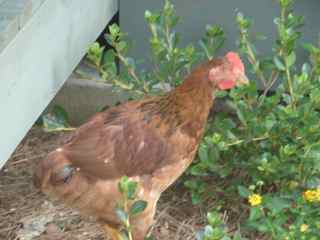 Rhode Island Reds were derived by Rhode Island farmers in the 1830's because they were looking for a good dual purpose bird.

They succeeded in crossing native birds of mixed blood with Brown Leghorns, Cochins, and Brahmas, as well as Red Malays, which are credited with contributing to the coloring of the Reds.

Not only are these chickens named for the state of Rhode Island, but they also were designated as the state bird of Rhode Island by the legislature in 1954. It is the only chicken recognized by the APA to receive this honor.

The Red is one of the best dual-purpose birds breeds and a great choice for the backyard chicken owner. The will tolerate confinement, but do their best when they are able to

The hens are a great layer of large brown eggs. These chickens are usually docile, although the roosters are known to be aggressive at times.

The Rhode Island birds were first acknowledged by the APA in 1904.