A rooster is an intact adult male chicken. He can also be called a cockerel (when less than a year old), a cock or a roo.

Believe it, or not, neutering a male chicken is a common practice, but he would be called a capon, similar to a castrated bull being called a steer.

If wanting to raise roo's for meat, caponizing is an option. The removal of their testes renders these males more docile, able to produce more tender meat, non-competitive over hens and territory, so unlikely to fight.

Roo's each have unique personalities, some more dominant than others. From the time they are little, and as they mature, most roosters develop spurs.

The spur is a long usually curved single claw growing from the inside of his legs, an inch or more from his feet. (Some hens grow spurs, often short and dull.) This is the defense weapon of a roo.

The older he gets, the longer and thicker his spurs become, and they can be extremely sharp. A roo will use his spurs to protect himself, his territory, or his flock from would-be predators, including humans. (I prefer to cull overly aggressive roo's that go after people. 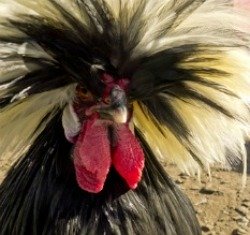 If you have small children, or if someone is near their level, such a roo could seriously damage the eyes and face.) The male chicken is a very clever creature and uses his innate senses to protect his flock.

A large part of his job is to alert the flock when potential danger arises. If you spend enough time watching you will learn the different sounds he makes. His other job is to alert his hens to good foods he finds.

I have had more than one rooster that actually brings food, by beak, to his favorite hens.

For breeding purposes it’s recommended to have one male for every 12 hens, to ensure good egg fertilization percentages. In a multiple roo flock one will be the most dominant, insisting on breeding rights.

Some are more tolerant of other roo's, especially if the new roo's were raised in the flock. A cockerel may succeed in challenging an older one, by fighting, and take over as the dominant cock. Such a fight may be bloody, and depending on the roo's may end in death.

Some breeds, like Gamefowl, are more prone to fighting and retain many similarities to wild Junglefowl. Gamefowl is not a specific breed, but a description of type. These roo's have been used around the world for the brutal “sport” of cock fighting.

These blood lines are worked to magnify the roo's instinct to fight others to the death. The hens of these breeds may be highly aggressive as well.  It’s often the breeds looking most like their wild ancestors that retain this aggressive survival instinct of fighting to the death.

Not every rooster is aggressive. Laying breeds, meat breeds and dual purpose breeds often have much of this fighting instinct bred out of them; but if you have more than one male in your flock it’s good to observe their behaviors regularly and separate any that fight seriously to blood or injury. If you find one cowering in a corner, know he lost and may be further attacked.

In flocks of these highly domesticated breeds you want a peaceful environment for good egg and meat production. Too many roosters will bother each other to fight, and the hens too often for breeding, which can disrupt laying. Roo's constantly challenging each other, chasing and fighting don’t grow as fast as those peacefully eating and resting through the day.

During the day a dominant rooster may perch about 4 or 5 feet above his flock, if possible, or circle around the hens to be on guard for predators. When out for a stroll he will often lead his flock. On seeing a potential intruder he will let out a long deep cry to let the hens know something is up and to be watchful for predators. More dominant hens will make this same sound, especially in a roosterless flock.

The most productive breeding season is spring and early summer, when warm days and nights are best for raising new chicks. The rooster will dance around the hen with one wing down during courtship or he will lead her to eat and while she is eating he will mount her and begin the mating process.

This courtship behavior can be seen any time of year, but more frequently in spring and summer. A good roo cares as much for the welfare of his flock as he does his breeding rights.

A good flock leader may fight to the death to get rid of a predator that is attacking one of his hens. Roosters are a vital part of any flock, though hen-only flocks do quite well and may be the only option for laying flocks kept in city limits.

Return From Rooster to All About Chickens