The Silver Laced Wyandotte is the workhorse of the dual purpose breeds. The Silver Laced were the first variety to come about of this breed and still one of the more popular today.

Color: Beak is always in shades of yellow and may have some dark striping on upper mandible. Eyes are reddish bay and the shanks and toes are yellow. 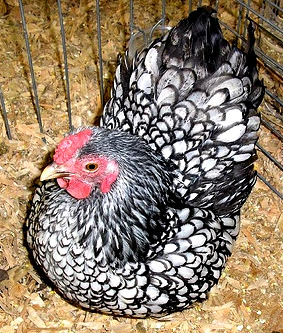 The Wyandotte breed was developed in the 1870's by four breeders from Massachusetts, Michigan, and New York.

They first named the breed the American Sebright, but when the breed was accepted to the APA they decided to name the breed after the place it originated like many other truly American breeds. The name Wyandotte is named after the similarly named Indian tribe of the area.

The roots of the Silver Laced Wyandotte are somewhat uncertain as the breeders did not keep records. Experts seem to agree though that breeds such as the Dark Brahma and the Spangled Hamburg were included in the mix.

The Silver Laced Wyandottes have a well-rounded body that is supported by stout legs. Many people use these birds for show, but they are very effective meat and egg birds. A dressed Wyandotte will be very similar in size to the Cornish Rock bird that is found at the stores today.

The Wyandotte was first admitted to the APA in 1883.