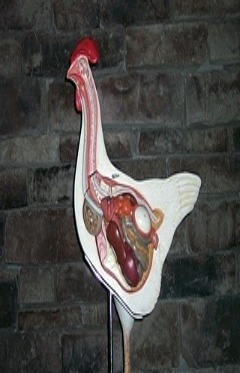 For humans and birds alike, our first method of defense against disease is the largest organ in our body, which is our skin. The majority of organisms that enter the body can only enter through the skin or the mucus membranes lining the openings to the outside of the body.

Once an organism gains access to the body the next line of defense is the lymphatic system. All body tissues are lubricated with a fluid known as "lymph." It derives from the bloodstream and accumulates in the spaces between tissue cells. It contains specialized white blood cells that hunt out and destroy invading microbes.

In birds, immunity is controlled by an organ behind the cloaca called the cloacal bursa. Some viral diseases can damage the cloacal bursa and permanently harm the birds immune system. One of the more popular ones is known as "Marek's Disease. 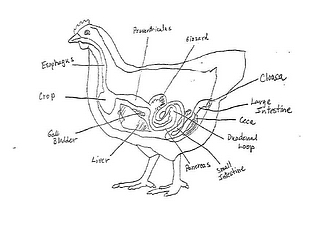 Knowing chicken anatomy will help you determine how your chickens break down their food and what problems may occur along the way. When food enters the beak of a chicken, it immediately begins being broken down by saliva (chickens don't have teeth).

The next place that the food enters, after the tongue pushes the food down the throat, is the esophagus. From the esophagus the food then enters the chicken's crop. 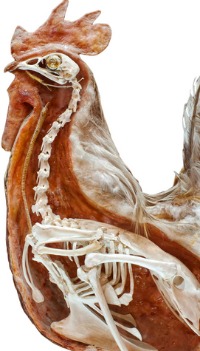 The crop is a pocket at the base of neck that holds food to be digested. Chickens can sometimes have problems with their crops, where food will get blocked.

This is commonly known as "Crop Impaction." From the crop, food moves to the proventriculus or true stomach. Enzymes break the food down further here.

It then passes on to the gizzard, or the mechanical stomach. The gizzard is built with thick strong muscles that do most of the breaking down of the food. Birds can have problems with their gizzards if they happen to eat small sharp objects such as staples or shards of glass.

Coming off of the small and large intestine are two blind pouches called the ceca that have no known function. The last portion of the intestine is known as the large intestine or rectum. It is relatively short.

These are just two of the systems that your chickens may have problems in.

Return from the Chicken Anatomy to Chicken Diseases