Fancy Poultry Breeds Can Be Fun

Are you interested in fancy poultry? Do you love beautiful animals that are also useful? These chickens aren't just your generic Leghorns. They come in many different shapes, sizes and colors, and their personalities are highly varied.

Some are strictly ornamental, or make great pets, while others are also great meat or egg chickens. You can enjoy breeding and showing them, or just have them around as pets or yard ornaments. Either way, they're a lot of fun to keep. Let's take a look at the world of fancy poultry.

Full sized and Bantam breeds of chickens are included under the umbrella of this term. Fancy chickens are the animal equivalent to the heirloom plants that have been becoming more popular.

They're attractive, interesting, and often have unusual characteristics. For instance, the Silver and Golden Sebrights are beautiful animals with silver or gold feathers edged starkly in black. They're a true Bantam, with no large version of the breed. 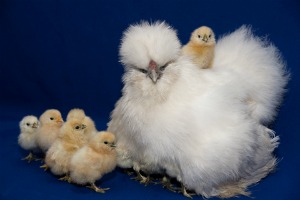 are another eye catching type of fancy chicken. Their feathers are fine and almost like hair, covering their whole bodies, including the legs. They're gentle and relatively calm, and are a really interesting addition to your coop.

Houdans are a French breed with a fluffy crest and a fifth toe that most chickens lack. They're prized for their good quality meat and large eggs.

Old English game chickens were originally bred for fighting. They're feisty and noisy, with a hardy constitution. They've also looked much the same for the past thousand years!

The Old English game hen isn't always a good mother, so you'll need to watch the chicks if you raise this fancy poultry breed. 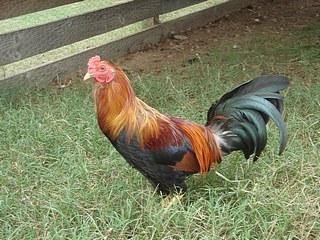 Rose comb chickens have a unique comb, a cocky personality and bright, lustrous feathers. They're popular both to show and as pets, and have been around for a long time. Then there's the popular Plymouth Rock.

This is another dual purpose chicken with good eggs and meat. They're descended from 19th century chickens and are a large breed, known for its docility. Hens tend to be quite broody. Brahmas are originally from Asia, and are also large and gentle, but a little harder to find.

As always, fanciness and beauty is in the eye of the beholder. My African Grey parrot says: Cocka-doodle-do, I’m a fancy chicken; but he also meows like a Siamese cat.

There are plenty of other interesting fancy poultry breeds out there, and some of them are extremely rare. If you'd like to move beyond your standard breed of chicken, it might be time to look at some of these more unusual birds. You may be surprised by how much they have to offer.

Another aspect to fancy chickens is the ever increasing array of feather colors. Some breeds, like the Ameracauna, come in many colors. Black, Blue, Blue Wheaten, Brown Red, Buff, Silver, Wheaten and White are standard, while new colors are in the works, including Lavender.

This breed carries a gene that produces a blue color in the egg shell and actual egg colors vary in shades of blue-green. The Ameracauna shares this blue gene with the related Aracauna.

One of the most fancy poultry eggs I’ve seen comes from the French Marans. They carry the brown egg gene, but add a special touch. As all chicken eggs are being layed, a protective coating is the final touch.

Marans are the only breed that can produce a dark chocolaty brown egg due to the pigment contained in the final protective coating.

In most bird species, egg color has to do with survival. Many bird eggs are solid white, but we have the Robin’s blue egg, and the speckled brown eggs of may quail and Killdeer.

For the longest time pure white chicken eggs were most desirable and breeds that produce them favored. As usual with humans, we get tired of the same old thing, so an array of multicolored eggs are available. I’ve even heard of purple!