Orloff Chickens are a slow growing bird, but is an excellent broiler and has a very good eating quality.

Comb, Wattles & Earlobes: They have a small walnut comb set well forward on the head and very small wattles and earlobes. All are bright red.

Color: The beak is yellow and the shanks and toes are yellow. The eyes are reddish bay. 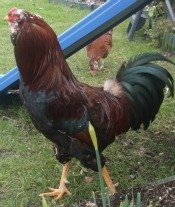 This breed is an ancient breed that was developed in the Persian Gulf area around Iran and Iraq and was widely dispersed by the 1500's.

The bird is named for a Russian breeder by the name of Count Orloff-Techesmensky, who did a lot to promote the breed in the 1800's.

This breed is a fairly tall bird and have a somewhat game like appearance. They have a large brow and a beard and muffs. They are UN-game like in temperament though, as they tend to be somewhat docile. They are very hardy in cold climates. 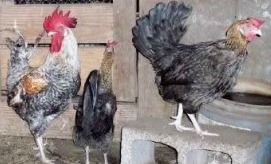 Though they are slow to mature, they are usually raised as meat birds. The hens are lay light brown eggs and are usually very productive layers when young, but this production tends to taper off as the hens age. They do not go broody.