Shamo Chickens are known for being the second tallest breed. They stand very upright and are making a name for themselves with show enthusiasts.

Class: Standard: All Other Standard Breeds Bantam: All Other Combs, Clean Legged

Comb, Wattles & Earlobes: They have a small pea comb and earlobes. The wattles are very small or missing entirely. They are all bright red.

Color: The beak is yellow and the eyes are pearl with yellow shanks and toes. 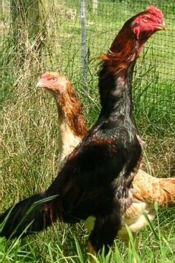 Special Qualities: They stand very upright and are becoming popular on the show circuit.

They measure about 30 inches tall, and clock in as the second tallest breed of chicken. They are an ancient breed who originated in Japan.

Quite a few of the domestic Japanese breeds have came out of crossing Shamo Chickens, such as the Yokohama and the Phoenix. The breed was first imported to the United States in 1874. It is a protected species in Japan.

They have very short hard feathers that may not fully cover the body. They also have a beetle brow, like the Malay, who they share common ancestry with. They also have no feathers on their face or throat and roughly textured facial skin.

These birds are very aggressive fighters and the chicks begin to fight almost immediately after birth. The cocks must be separated to prevent them from fighting to the death.

The birds do like humans though, and with the correct care from a young age can be domesticated and tamed down rather easily. The hens are excellent mothers and lay more eggs than many of the other Asiatic game breeds.

The breed was first recognized by the APA in 1981.