The chicken comb is a featherless natural growth on the head of most hens and roosters. It’s usually bright red, but the color may be purple, depending on chicken breed and coloring.

A “straight” or “single” comb is most common, but “rose” combs, “pea” combs and other shapes have been part of the creation of different breeds for centuries.

Other, less common, shapes are: buttercup, cushion, strawberry, v-shaped, and walnut. In some breeds such as Leghorns and Rhode Island Reds,

both single comb and rose combs are standard.

The classification of all modern chicken breeds is Gallus domesticus. The ancestor of all our domesticated chickens is the Red Junglefowl, or Gallus Gallus. The word "gallus" means comb in Latin. 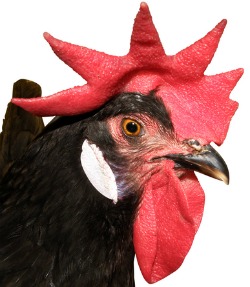 You might wonder why chickens have combs or if a comb serves a purpose. In nature, such decorations can signal health and genetic superiority. A rooster with a nice tall and bright red comb will stand out and may be preferred by hens.

Since both hens and roosters usually have combs we can safely assume it serves a purpose other than just decoration. As with many animal species head pieces of one kind or another, can draw heat away from the body.

Combs have blood circulating through them, which is cooled as it flows through, helping to keep the brain and vital organs safe in hot weather. There may also be a warming effect in cold weather when sunlight shines directly on the comb.

The comb is the only soft tissue of a well feathered chicken exposed to cold night temperatures. Even their legs and feet are generally tucked under them warmed by downy feathers.

Some modern chicken breeds have very exaggerated combs and it’s the tall single combs that are most vulnerable to frost bite. Some keepers apply a generous coating of petroleum jelly to help insulate chicken combs in sub-freezing temperatures. Bigger combed roosters are most often affected, though hens may be also.

The most common sign of comb frost bite is a dark purple at the tips, indicating lack of blood flow in red combed birds. Sometimes this purple will go away once the comb is warmed and blood flows again. If not, the tips of the chicken comb will turn black, dry and fall off.

Though possible, infection from frost bite is rare in healthy chicken habitats. Those with exhibition chicken breeds often heat their coops to prevent comb damage. Damaged combs would disqualify purebred chickens from competition.

Probably the most unusual chicken comb is that of the Chinese Silky. This is the “walnut” comb and is often naturally dark purple, sometimes looking black, with ridges and bumps like a shelled walnut. These combs are usually close to the head and much less likely to suffer effects of frost bite, except in extreme deformities.

Dubbing is a process of removing a chicken comb. This can be a farming practice to prevent frost bite or chickens from injuring each other, generally performed at 1 – 3 days of age.

Though superficial, for “Game” chickens, such as Old English and American, it is a requirement to be shown competitively in the US and in some countries.

Some countries outlaw the practice as animal cruelty. Like tail docking and ear cropping of some dog breeds, dubbing for show is for looks though seems to have its roots in the fighting history of game breeds.

A chicken in poor health, that usually carries a bright plump comb, may suddenly have discoloration and shriveling of the comb. If blood circulation is poor a red comb will turn purple and a normally purple comb will be darker.

Dehydration and poor circulation may cause a chicken comb that normally stands erect to flop over, though some chickens have grown too tall a comb or it’s been damaged and is unable to stay erect.

Some parasites may attack the soft flesh of a chicken comb and cause damage and a crusty or flaky surface. Changes in comb appearance should be noted and a cause found. This may prevent the spread of illnesses in the flock. If you have a question you would like answered click here or type your Question below.

I am watching 6 chickens over the summer while my neighbors are out of town. Its been 5 weeks since I've been watching them. Yesterday out of no where, …

Got home yeterday to find my hen standing alone with her comb flopped and the edges slightly purple. Heat is at 100°, I had a mister, a kiddie pool and …

One of my chucks has a scab on her comb. sometimes it bleeds. Is this common ?

CAN A ROOSTER BE A BELLWETHER?

I have a rooster whose comb is paler than it was a few months ago. I don't see any mites on it but the comb has small white dots, almost like dry skin …

HOW TO CARE FOR A SICK CHICKEN

One of my hens comb has turned to a pale pink. All the other hens still have a vibrant red comb. Help! What do I need to do to help her?

WHY DID HEN COMB TURN PURPLE?

Hi I was wondering if you know what may be wrong with my Wellsummer hen. She is about 7 months old. For the last two days she has been acting depressed …

WHAT CAUSES A COMB TO TURN WHITE?

What does it mean when a hen comb turns white?

WHAT CAUSES COMP TIPS TO BE PURPLE?

What could be the cause of my young Isa Red having a purple tipped comb? It's summer here so not related to frost bite. She is eating and drinking but …

Why Would a Comb Have Black Spots?

Hi, I have been feeding some wild chickens for a year. There are a huge flock of them. There is one dominant rooser (grey) with two younger roosters …

What Would Make a Chicken's Comb Turn Pink?

I have a 1.5 year old hen who was injured and is now healing. Her comb has turned pink

My rooster and hen have spots on their combs. Can you please tell me what this looks like to you? I sent a picture.

Today, my laying hen had comb all droopy and it had turned pale red.

We have 8 leghorn hens that are about 5-6 months old. All of them now have droopy and black spotted combs. It has been very hot here, over 100 degrees. …

My rooster is less than a year old- about 4 1/2 months. His comb has just started turning a dark purple towards the back, but he has not started acting …

Hello. I have a rooster and he is 8 months old his crown is very big and because of that it started tilting towards one side and now his right eye is totally …

What eats away a roosters comb

I have a rooster that has a comb that looks like it is dying and shriveling up. Is this a parasite problem? Most of the chickens have feather lose on …

My year-old Barred Rock has what looks like little white strings coming from the points of her comb. I put some vaseline on them in case it is a mite or …

I have a pol warren, she is 23wks old. Her comb is a very pale pink and it looks like one of my other chickens has tried to attack it. Any advice/recommendations …

Question WE HAVE A RED PRODUCER HEN THAT IS LOOKING AWFUL. VERY PALE COMBS, DULL FEATHERS THAT ARE sparse. SHE SEEMS ALRIGHT IN EVERY OTHER WAY. …

Question Rooster with black tips on his comb: One of my roosters has a very large and beautiful comb and wattle. We have had severe cold in the Dallas …

Not rated yet
Question Hen missing feathers at head & rear: I have a flock of 20 chickens ranging from 1-5 yrs old. My 2 yr old Aracauna hen started loosing/plucking …

Not rated yet
Question Hen's body looks too heavy: My mixed white hen has just started looking "puffy" over the last few weeks. It seems she suddenly started …

Not rated yet
Question: Rooster Comb Bloody: My rooster is bleeding from what I think u would call the mane (comb). Any reason for why? Answer: The usually …