Chicken eye problems do seem to occur in backyard flocks frequently. There are many different types of eye problems.

In healthy chickens, vision is excellent during day light hours and extremely poor at night. The average chicken is able to see the smallest seeds and bugs, including mites, during the day, but as the sun begins setting, their vision becomes unreliable, causing them to head to the safety of their roost for the night.

Problems can come from injuries or disease including:

Chickens rarely attack each other in such a way to cause chicken eye problems, but roosters jabbing at each other with their sharp spurs or pecking with sharp beaks may do serious damage to any body part.

Hens are less likely to fight, but it happens. In a chicken flock, when a member becomes sick, weak or injured, other flock members out of curiosity or survival instincts may peck mercilessly at it, causing more damage, and possible death.  Unsuccessful predator attacks may result in eye damage. 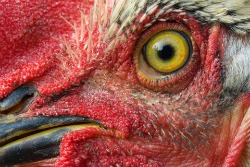 These infections and diseases can cause:

An example of on one chicken eye problem is Avian Pox. It is a viral disease that affects many chickens and can affect and be spread by wild bird populations. Blistery lesions are often around the eyes causing swelling with impairment of sight and blindness in severe cases.

Marek's Disease is a viral disease (a form of herpes virus) resulting in a type of cancer. Tumors can grow in the iris causing blindness as well as affecting major organs.

When you first notice an eye problem you should wash the eyes out. Keeping an eye wash on hand is a good idea; something that can easily be squirted into the eye to remove any foreign particles and reveal any damage.

Another good product to have on hand for chicken eye problems is an antibiotic eye ointment, available at many feed stores. If there is injury to the eyeball, the ointment can prevent infection while assisting in a quick healing of the injury. If not damaged too badly, eye injuries heal quickly.

A chicken with impaired vision due to injury or disease should be immediately removed from the flock to protect it and possibly prevent the spread of disease.

Chickens know that the sick and weak draw attention to predators, so they try to drive the weaker members away from the flock. In the process they do more damage, exposing themselves to a possibly contagious disease.

If you aren’t familiar with chicken diseases or find a chicken eye problem with an unknown cause, you might want the help of a good avian vet.

In the country, where chickens are much more popular, you may be able to find a good farm vet through neighbors or friends. Finding one before you have a problem is always a good plan.

The reality is that many sick chickens will never see a vet as their monetary value makes spending $50 to $100 or more unreasonable. But the fact is, even with a small flock, you could lose all due to a contagious disease, plus have a coop and yard that may need months of being empty to make sure disease is gone.

Some chicken eye problems are simple to fix and heal quickly while others are caused by serious disease. Making sure which one you have may save the lives of all your current and future chickens.

If you do have a major disease there may be a vaccination against it. You may need to purchase pre-vaccinated replacement stock to survive in a yard and coop possibly contaminated with disease. Learning what disease it is, from a vet able to test will be a good step in getting rid of it for good.

The eye is a delicate and vital part of a chicken’s ability to remain healthy and active. Their sense of smell is poor, as with most avian species.

Once vision is lost or severely impaired a chicken has little hope for survival; eating, finding water and roosting will be impossible. It’s unrealistic to expect one with serious chicken eye problems to do well in a flock setting, though chickens with one good eye seem to adapt.

Even still, such a handicapped chicken could be expected to be picked on and bullied by other members of the flock. Being allowed access to enough food by the rest of the flock is not guaranteed, so making sure a partially blind chicken isn’t slowly starving to death is important.

Have 13 adolescent chickens mixed in with 12 adult chickens, one adolescent is smaller than the rest. Went out this morning and the eyes on the smaller …

My mom said the chicks have watery red eyes. Why is this so?

My young (approx. 5 month old) hen is lethargic keeping one eye closed. The yellow iris portion appears red but can't tell for sure.

3 month old buff orphington pullet started keeping eyes closed alot but seemed otherwise fine. Would open eyes to eat or when she bumped into something. …

One of our hens suddenly has a closed eye and small crusty black spots on her comb on the same side. The wattle on that side is mottled red and white, …

Dear Sharon, I have a gold sex link hen who 2 days ago began keeping her right eye closed. She is lethargic, but seems to be eating/drinking/pooping …

Hi, I will apologize in advance for the length of this question - I just want to give you all of the background info which might be pertinent. I …

CAN THEIR VISION IMPROVE?

Hello. I purchased 4 Cochin chicks locally 8 weeks ago. When scattering meal worms for treats I noticed they are pecking in front of their target! I tried …

WHAT IS GOING ON WITH THIS HEN'S EYES?

What is the name of medicine for avian (pox?) or any hen eye disease?

WHAT COULD CAUSE TEARY CHICK EYES?

what can I do for the chick when both eyes are watering and she seems to be in pain?

I have a 1 week old bantam who has a clear fluid coming out of one eye and it is NOT swollen. She eats and drinks fine and is active. Her eye is cleaned …

Hi, we recently purchased six Dominique hens and their Roo. All were hand raised from chicks. One of the hens had a swollen eye, no purulent discharge, …

I have 3 Dark Brahma pullets. I noticed 3 days ago 1 was really skinny, pecking at the air above the feed, and the dominant pullet was trying to direct …

Problem Above the Eyes

What is treatment for this hen... she suffers from something like black heads above the eye... local people are saying these absorb blood, and day by …

Our laying hen Edwina seems to have an eye issue. When out and about in the yard, her lid will be partially closed over her one eye, most/all of the time. …

Hello. I have a pekin who has a very swollen eye. I first thought it may have been an eye worm but now I am not convinced. I can't find a worm and it seems …

I have a small flock, They were healthy until new chicks introduced 3 chicks have a problem with one eye they keep shut, two chicks have both eye closed, …

My chicken has a watery eye for two month

Question We have a 1 year old blind chicken that is developing seizures. The other five of the flock are healthy. Is there reason to avoid eating …

Chicken With Bubbles and Foamy Eyes

Question Why is there sudden blindness in my hen? She is 2-3 years old, Golden Laced Wyandotte hen who is active, eats and drinks and obviously can't …

Question The eyes swollen in my rooster. Yesterday my roosters were just fine, but today when I looked at them, both of their eyes were swollen shut. …

Today we noticed that one of our hens has a swollen eye (shut) but the lens is clear and white stuff growing on the flaps behind her ears. Is this a fungus …

I have a hen with a swollen eye. No sign of trauma nothing. It's getting bigger too. I've cleaned it, put drops into it. Each day it's swollen worse. She …

Question Sick chickens - eyes & respiratory: I have a chicken that has very swollen and hazy eyes. She is sneezing and has a runny nose. She …